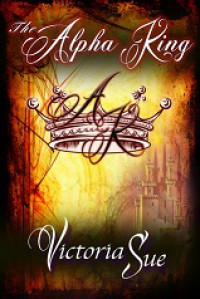 If you are looking for an mpreg shifter story with an actual plot, look no further! You found it here.

This was really good. This is an action packed shifter story with some sweet romantic ‘I cannot live without you’ moments. If I have one complaint it is that I felt the action took over in the second half, and I would have liked just a couple of pages more so we got just a bit more romance.

Luca lives in a world where shifters rule and humans are being enslaved and abused. Luca is the Alpha-heir and as soon as his father steps down he will become the Alpha of his pack.

He is 18 when he is stabbed by his twin brother out of jealousy. He is left to die in the woods when he meets a 13 year old boy. This boy touches him and tells Luca he will be the Alpha King, not just an alpha. Luca is rescued when the boy gets help. But he is sad he never sees the boy again.

The legends say the Alpha King and his one true Omega mate have powers no one can comprehend. He is to rule the entire kingdom and bring peace.

When Luca is 25 he is awaiting his crowning ceremony together with a couple of other Alpha-heirs. Each get to pick an omega to mate with, but when Luca sees a young human man being whipped, he jumps up to stop the attacker. It is then that his powers show himself. When he looks into the boy’s eyes he knows it is the boy from 7 years ago.

Because of Luca’s new powers it is clear from the start he is the true Alpha King and that the boy, Kit, is his true human Omega.

Not everyone likes it that things will now change and that humans need to be treated with respect from now on. Luca and Kit now have lots of enemies…

I just loved how it was clear from the start that Luca and Kit belonged together. Is it insta-love? Yes, totally. But because it was meant to be, it felt very romantic instead of fake.

There is some relationship angst when the couple thinks they need a female breeder so Luca can have an heir, but it’s not dragged out and it all works out when they find out

I do have to say that the end felt a bit rushed. We get all the action and then 2 pages of ‘end’, while I wanted just a bit more relaxation time for the two after all they’d been through.

This is definitely one of the best mpregs out there. If you’d like to try a shifter mpreg with lots of action, try this one.