Review: Damned If You Do “You once told me that my soul is like a beacon to you. Like a lighthouse.”
“You are my guiding star.”
“I don’t know if it worked, but…” Seth bit his lip, “I tried to shine extra bright for you.”

Abaddon is a devil, one of many slaving away in hell. And by slaving away I mean do paperwork. Hell is endless and endless paperwork. Without a computer. Well, if that doesn’t sound like hell, I don’t know what does…

He has to get people to cede their soul to him so that they can end up like him. But Abaddon never liked collecting souls all that much. So he is on probation. He needs to collect more souls, or he will get demoted. He will never be able to get to earth again and he will have to do an even worse job than he is doing now.

There’s laying asphalt around the Lake of Fire, hauling rocks out of the Great Abyss, poop-scooping for the Hounds of Hell, selling flashlights without batteries in the Outer Darkness. And those are just the jobs in the underworld. There are plenty of places they could send you up top too. Mowing lawns in Louisiana in mid-August, cleaning hotel rooms in Vegas, emptying bedpans in a celebrity rehab facility in Hollywood. There’s retail work, fast food franchises, lunchroom duty, janitorial work—.”

So he goes off to search for that one bright soul that will make him reach his quota. It is then that he feels the brightest soul he has ever encountered. Seth is a 22 year old blind young man, who is traveling with a revival to spread the word of God.

I have to say that there was a lot of bible quoting going on that I cared nothing about. But besides that this was great!

I loved how Abaddon couldn’t stay away from Seth. How tender he was even though he was supposed to be a scary devil.

This book is low on sexy times. There was one scene, but this concentrates mostly on the growing relationship between the guys and not necessarily on the sex. 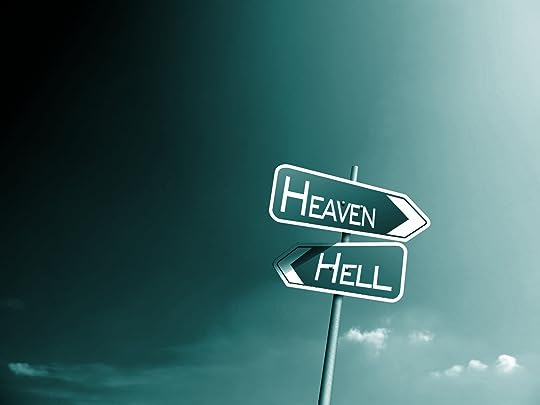