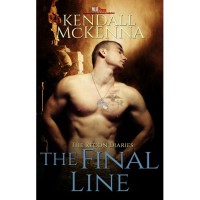 Well, at least it was better than the previous two.
I liked it. I didn't love it, but that was not because the story was bad, just some things were not to my liking.

The blurb kind of says it all. Boy meets boy, they slowly fall in love, boy nr 1 has PTSD from his time in Afghanistan, boy nr 2 does not mind, they have sex, they declare their love and live happily ever after.
Okay.. it is a little bit more than that and overall I really did like it.
But some bits were a bit boring... Corey en Sean were cute together tough. And the way the author described the military and marine stuff felt really authentic. I don't know if that was the case, but it felt real to me.
I did have one issue with the story. I am fine when a book reflects real life (a little), but I do not want to read about erectile dysfunction in my books. I really felt for Corey and everything he has been through, but in my books I want the MC's going at it like energizer bunnies! I know they solved it with little blue pills (and not the kind Neo gets in the Matrix), but still, it was a problem in the book and I did not like it.

Overall a nice read, but I won't read it again.