The Duty of a Beta 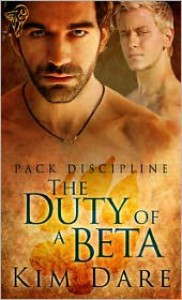 This was a bit dull compared to the other two.

I really liked the powerplay in the previous books, with the submissive being someone you would not expect.

Gunnar is the new beta of the pack and is supposed to be mated to Alfred, the trouble maker of the pack. But Gunnar can’t keep his eyes off Talbot, the pack’s omega.

It is clear from the start that Gunnar is way more dominant than Talbot and both wolves are fine with that. Their power balance totally fits that of the pack hierarchy.

The main problem in this book is the fact that Gunnar is supposed to be courting Alfred and not Talbot. This felt a bit too artificial for me.

Because if Gunnar just went to the alphas and told them he was in love with Talbot and didn’t want to be mated to Alfred, all would have been fine. But because they were sneaking behind everyone’s back it turned out to be a huge problem (at first).

I am very curious to see how Caden, Gunnar’s younger brother, will be able to handle Alfred. So on to the next!